Apples in Watercolour and Tolkien

This post is about watercolour and apples in the first half, with a connection to the Lord of the Rings in the second half.

This spring seems to be a particularly wholesome one – the weather has been glorious, the trees have come into lively bloom, the skies are pollution-free blue; so not being able to go on my usual hikes at this time of year has been a blow. Given the ongoing pandemic and lockdown, I have sought other ways to find some inner calm despite the anxious situation around us.

Being dextrous is a particularly effective way to brighten one’s mood and stave off worries and boredom. While others have turned to baking, or home decorating, I have turned to art.

I’m used to using a mixture of ink and pencil, with occasional watercolour, in my illustrations. However, it has been a very, very long time since I tried my hand at still life watercolour painting. So I thought I’d give this a go. Watercolour still life requires more technical skill, greater attention to detail, with less room for making mistakes. Unlike other mediums which allow greater ‘covering-up’ of errors, watercolour is notoriously unforgiving. I expected my skills would be very rusty, so I needed to start with something simple. Enter the humble Apple. 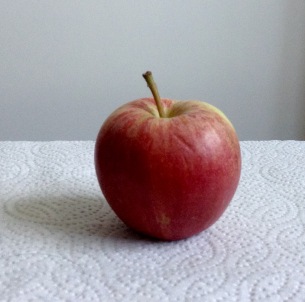 Here is the said apple – now i need to point out this photo was taken after the painting was done, after some days of the apple sitting out and presumably drying up a bit. The lighting at the time was also different from the lighting during painting hours. It looks like an easy enough choice, but I regretted it once I started painting – I wished I had chosen a straightforward monochrome apple, either red or green would have sufficed. Instead I had opted for this ambiguous blend of green and red that made things quite a lot harder. By the time I realised, it was too late.

I learned several lessons with this attempt: 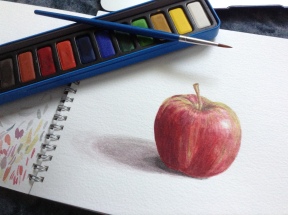 1. You cannot over layer watercolour paint as much as other mediums – I knew this but had forgotten. The paper does not like it and starts to wear away.

Excessive brushing/ water also starts to remove layers you did not intend to remove. So you need to be a lot more confident and decisive with this medium from the outset.

2. As mentioned on Twitter, no matter how dark you think your tonal shading is, it is almost certainly not dark enough. Be bold, go darker, the painting will vastly improve. You will not ruin the painting, though initially you fear exactly that.

3. I always remember an important piece of advice from my art teacher at school – do not paint what you think you see or think you should see; paint what you do see. The temptation to paint something as you see it in your mind, or to ‘fill in’ what you know is a feature of the object in front of you, even though you can’t actual see it at that moment, does not do the object or your painting justice. To paint what you see, and not what you want to see, requires a lot of trust in honesty –  i.e if you are honest in painting what you see, the effect will be closer to the truth, and produce a better painting, even if it does not feel like that at the time. With this apple, I could see green within the red, orange within maroon – when I put the colours on paper they looked out of place and jarring. But gradually, the colours took their rightful place and, somehow, conveyed what i was seeing in front of me.

4. Having warned against over-layering, I want to extol the virtues of moderate, necessary, layering. The beauty of watercolour is its translucence, which means those layers of different colours quite effectively convey the ambiguity and blend of colours in the object you are painting. Again, this requires a degree of trust in the process – I was worried at first that with a new layer of paint, my previous layers would be obsolete, and what is the point of undoing old work? But that was not the case.

5. And yet another caveat – while the main subject of the painting can be layered, with colours building and blending, the object’s shadow needs a clean sweep of light paint, because over-layering makes it grainy. The shadow seems like the easier part of the painting, but it can quite easily ruin it even though it is not the primary focus. I am not very happy with the shadow in my painting.

6. Clean your brush and renew the water regularly!

So those are my reflections as an ‘old re-beginner’ – I’m sure they all seem obvious to seasoned artists, but they may be useful for others like me, wanting to give this a go (in my case, after a long hiatus). The photographs produced different effects, due to changes in lighting at different times of day – this one here is closer to the actual colour of the apple. But I think I prefer the moodiness of the one above.

Apples in The Lord of the Rings

For those who are more interested in Tolkien content rather than the art content, the apple makes a couple of appearances in the Lord of the Rings. Those appearances are neatly summed up in the wonderful “Flora of Middle-Earth: Plants of J.R.R. Tolkien’s Legendarium” By Walter S. Judd & Graham A. Judd. Under the entry ‘Apples (Malus Domestica M. Silvestris, and Related Species)’ they write:

“Orchard apples were widely cultivated in Middle-earth of the Third Age, as they are across the Northern hemisphere today, although they must have been introduced there because they likely were originally restricted to a forested region east of the Sea of Rhun… ”

They point out that apples are first mentioned in Bilbo’s walking song (“Apple, thorn, and nut and sloe…” LOTR 1: iii) sung by Frodo, Sam, and Pippin. The trio then find apples served that evening at the elves’ feast in Woodyend. So rich and memorable were the fruits that Sam mused “if I could grow apples like that, I would call myself a gardener.”

Another reference to apples that I had forgotten about (and was helpfully reminded by Joe Hoffman), is the Entwives’ fondness for cultivated fruits. Such was their keenness for growing apple trees (and other ‘lesser’ orchard trees) that they travelled far from the wild forests and became estranged from the Ents. So apples play some role in causing sadness and loss in the legendarium.

Finally, probably the most memorable appearance of apples in the LOTR takes place in Bree, at the Prancing Pony Inn. As they leave the inn under many watchful eyes, we are told:

“Sam was chewing an apple thoughtfully. He had a pocket full of them: a parting present from Nob and Bob. ‘Apples for walking, and a pipe for sitting,’ he said. ‘But I reckon I’ll miss them both before long.'”

And true enough, moments later, Sam sacrifices one of his apples to Bill Ferny – used as a projectile to hit Bill “square on the nose”. – “Waste of a good apple” are Sam’s memorable words.

5 Responses to Apples in Watercolour and Tolkien