I was once asked for some of my favourite quotations from The Lord of the Rings.

Thinking about this question, I pondered on the ones that often get repeated – of these, the most common, and frankly now unoriginal one, is from The Fellowship of the Ring: “Not all those who wander are lost” – in reference to Aragorn, Strider, legendary Ranger of the North.

I’ve seen this quotation on posters in the London Underground, tattooed on people’s arms, numerous ‘memes’ and single-line blog posts…it is a great verse from a meaningful poem (which hardly ever gets quoted in its entirety). But in its ubiquity it has lost a great deal of its resonance and context – I get the impression that it sometimes gets quoted as a validation for aimlessness in life, and an individualistic nomadism. But of course in its original context, it reflected an imposed exile on Strider, a burden and role in life he was willing to bear for a greater purpose, before he was called to fulfil his greatest deed in the War of the Ring. Anyhow, on being asked to give my favourite quotations, needless to say I wanted to avoid the obvious. It was a difficult task, there are so many lines that are profound or beautiful in their imagery and structure.  But I came up with the following three passages – one from each of the 3 volumes:

1. Fellowship of the Ring:

“Dark is the water of Kheled-Zaram, and cold are the springs of Kibil-Nala, and fair were the many-pillared halls of Khazad-dum in Elder Days before the fall of mighty kings beneath the stone.”

(Galadriel receiving The Fellowship in Lothlorien).

I opted for the first quotation from Galadriel because it is so visual – it is impossible not to imagine the pristine, ice-cold beauty of the Mirrormere from this description.  Also, a lot of the poetic reflections on nature tend to be associated with the elves and their dwellings – but this example demonstrates the often overlooked depth of connection with the earth that can be found among the dwarves.  It’s also satisfying to hear the dwarvish tongue and its more guttural sounds, compared to the light tones of Elvish speech that we are accustomed to in the story – the fact it is Galadriel who speaks these words, to comfort and reassure Gimli in his sorrow and regret shows the depths of her compassion, empathy and wisdom.  Instead of using her power to rebuke Gimli and magnify her authority, she uses it to show an unconditional hospitality; even if we knew nothing else about Galadriel, this scene alone is a mark of her greatness. This empathetic appreciation of something that is so precious to Gimli rightly affords the Dwarvish race both dignity and depth.  I also liked the episode that preceded this quotation after the Company flee from Moria, in which Gimli invites Frodo to go with him to witness the beauty of Kheled-Zaram under the stars.  This is the first comforting gesture anyone is able to offer the grief-stricken Frodo, and he does indeed take some solace from it.  I always admired Gimli’s loyalty towards Frodo.

“Frodo raised his head, and then stood up. Despair had not left him, but the weakness had passed. He even smiled grimly, feeling now as clearly as a moment before he had felt the opposite, that what he had to do he had to do, if he could, and that whether Faramir or Aragorn or Elrond or Galadriel or Gandalf or anyone else ever knew about it was beside the purpose. He took his staff in one hand and the phial in his other. When he saw that the clear light was welling through his fingers, he thrust it into his bosom and held it against his heart”. 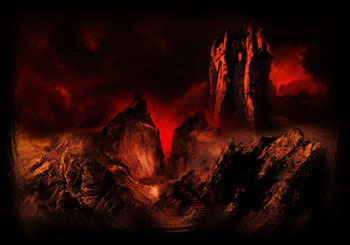 I chose this second quotation because I think it is both pitiful and powerful. Just moments before, Frodo Baggins was prostrate on the ground in a state of despair and fear.  His quiet courage and determination had fled – he was exposed, bereft, vulnerable and broke down in tears.  But in the midst of several darknesses – the darkness clouding his mind, and the suffocating darkness of Mordor – Frodo is able to summon up a last tide of effort and perseverance.  This is not the strength of Gandalf, Elrond, or some other external force, this is strength that comes from the raw will of a humble hobbit.  It is also a very pivotal moment in that Frodo is able to throw off the burden of others’ expectations – one learns from this quotation that until now, some of Frodo’s motivation stemmed from the hope that his efforts might be appreciated by the great and the good, that he would be doing them proud and proving himself worthy of their trust.  What of that motive if they were no longer alive to see his deeds? If there was now nothing left to save?

Frodo from this point onwards strips his motives of all pretensions to nobility; and it is now no longer about the people he loves but about something bigger and at the same time simpler: the only relationship he can consider now is the one between himself, the Ring, and Mount Doom.  And with this simplified perspective, his burden appears to be momentarily lightened and his mission clearer.  This happens to be one of the significant episodes when Frodo’s emotions and consciousness is laid open to us the reader – very soon, the window allowing us into his mind and inner state will become smaller and smaller, until we the reader are shut out.  Looking back, this quotation becomes all the more important because it is one of the last insights we get before Frodo becomes ever more distant and inaccessible.

3. The Return of the King

“His golden shield was uncovered, and lo! It shone like an image of the Sun, and the grass flamed into green about the white feet of his steed.”

(On King Theoden’s last ride into battle, at the Pelennor Fields).

The last quotation is one I wouldn’t usually opt for – when it comes to stories, I tend to be more character-oriented, and am particularly fascinated by that which gives insight into  a character’s personality, or psychology, or some interesting development in their outlook.  If not that, then I am drawn towards written imagery of nature.  This quotation however, though it doesn’t really fall into the usual remit, stood out for me when I last read the Return of the King.  The deliberately archaic style of prose here distinguishes the scene as significant and different from what preceded it – it transports the reader beyond the particular context of the story, and transcends directly into legend. This is now no longer just about King Theoden, the Rohirrim or the impending battle, but about the chronicling of history over time and the making of myth.  There is also a lot of hope in this caption – the green, the gold and the white are all colours of optimism and success.  It signifies King Theoden’s reawakening,  rebirth almost – particularly poignant because we know, retrospectively, that we are in fact witnessing the King’s ride to his own death – but though he will fall, these lines ensure he is triumphant.  The redemption that King Theoden seeks is confirmed in these words.

This entry was posted in Tolkien and tagged Earth and Oak, Frodo, Gimli, J.R.R. Tolkien, LOTR, Middle Earth, Mordor, Moria, The Fellowship of the Ring, The Lord of the Rings, The Return of the King, Theoden, Two Towers. Bookmark the permalink.